You can now watch the 40 minutes documentary made by Henk de Jong, Tshering Gyeltshen and Peter Jan van der Burgh in 2012 on the threat of melting glacial lakes in Bhutan. The film has won the Best ICIMOD Mountain Film Award of the Kathmandu International Mountain Film Festival 2013. 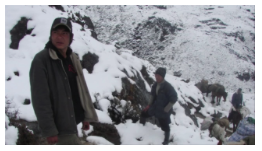 86 centimetres....
Bhutan fights against the effects of climate warming, that weakens the dams of glacial lakes in the Himalayan mountains. 2010 - 2013 305 man and a few women walked…