March 13, 2017
People living in the western, central and northern regions of the country woke up to a thick blanket of snow on March 11. Some isolated places of eastern Bhutan also received snowfall.
Senior meteorologist, Tayba Buddha Tamang, said that the Department of Hydro Met Services had a good amount of precipitation across the country on March 11. “We have correctly predicted the event.”
Gasa recorded 11.4 inches of fresh snow, the highest among the six dzongkhags that received snowfall on the day, followed by Haa at 8.7 inches.
Thimphu and Paro recorded 7 inches of snow each while Bumthang recorded 1.8 inches.
Trongsa had traces of snow while the rest of the country received moderate rainfall. 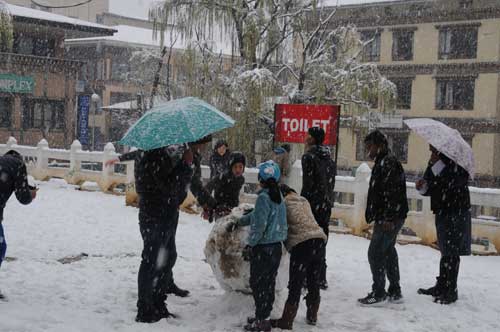 In Thimphu, snowflakes started falling from 6am until late afternoon, which delighted many who took to social media to post photos and videos.
Children woke up early to go out and make snowmans and families went out to experience the first snowfall of the year. The snow, this year lasted longer than in recent years.
Tayba Buddha Tamang said that the National Centre for Hydro-Metrological Forcasting started recording snow events and the quantity since 2013. This is the first time since then that Thimphu had heavy snowfall. “It might be the heaviest in the last decade.” 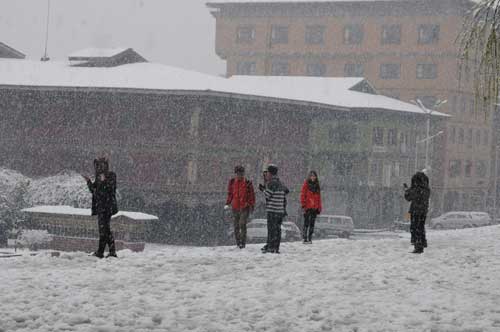 He explained that the winter precipitation in Bhutan is mostly due to the western disturbance (WD) that is the westerly wind blowing towards the eastern himalayan range bringing moisture from the Mediterranean Sea.
He added that this year the WD was strong and additional moisture incursion was from the Arabian sea which caused a suitable environment for the snow formation in Bhutan.
He said that the onset of the spring season is slowly gaining. Precipitation in the coming weeks is less likely, according to the forecast. 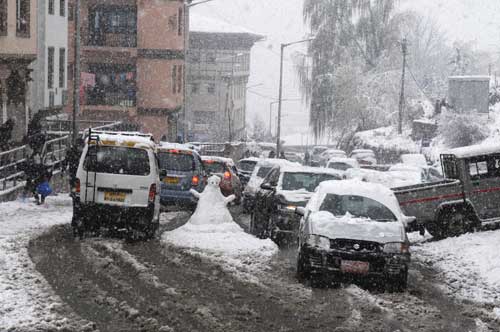 The government declared Saturday a holiday for residents of Thimphu and other dzongkhags that experienced the snowfall.
Prime Minister Tshering Tobgay posted the news on his Facebook page and advised citizens to be safe. He assured that the authorities concerned will do their best to keep essential services running and to respond to any mishaps.
For eight-year-old, Yonten Thinley Dendup, who turned nine on the day of the snowfall, it was the best birthday gift he had ever received. “I am making an Olaf,” Yonten said with excitement as he rolled up snow. 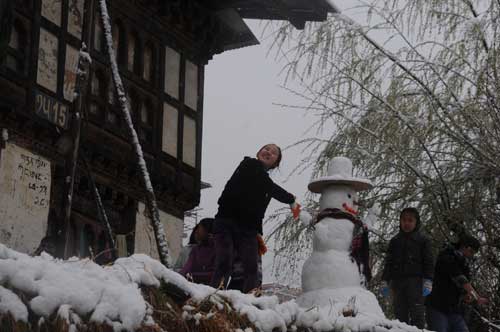 Pictures of snowmen and the towns, hills and valleys blanketed in white flakes flooded social media platforms like Facebook, WeChat and Instagram.
A Thimphu resident, Pema Wangmo, said that she was surprised to see such fat, fluffy flakes twirling down from the sky as she drew her room’s curtains. “My kids jumped out of bed to see if what I was saying was true. It was a pleasant surprise indeed,” she said.
Pema Wangmo said that last year’s snowfall was light and didn’t last long. “I took my kids to Dochula to witness a thick layer of snowfall,” she said. “This year, we had plentiful snow, enough to cheer my kids.”
Sonam Choki, a student with the Royal Thimphu College, said that snow is always expected and brings much joy to all. “The first snowfall has its charm and also it is romantic.”
Meanwhile, Jangchuk, 78, said that if a year has good snowfall then the year is considered auspicious. “Good snowfall means good harvest. Heavy snowfall promises healthy crops and the harvest is bountiful.”
While the snow cheered up many including young and old, it wasn’t pleasing for some including travellers.
The Road Safety and Transport Authority (RSTA) and traffic police division reported several roadblocks at higher passes on Saturday. Movement of public transport was also cancelled on snow day.
However, all the roadblocks caused by the snowfall including the Wangdue-Pelela-Trongsa-Bumthang road was cleared by yesterday evening.
All but two flights in and out of Paro airport were cancelled.
Tents at RENEW’s ongoing mega fair at Changlimithang in Thimphu collapsed due to the weight of the snow.
Meanwhile, a number of vehicle accidents were also reported on snow day.
Dechen Tshomo