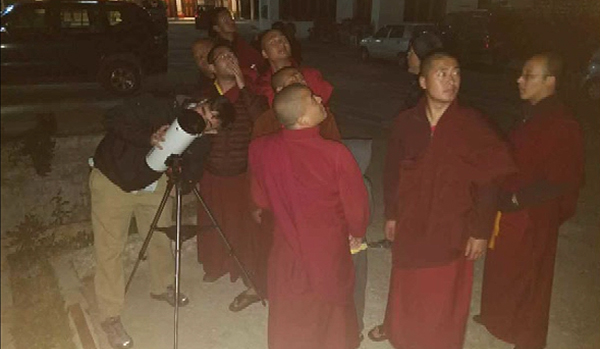 Acquiring scientific education has become crucial for monks and nuns in this day and age according to American scientists and Buddhist scholars. They say, a combined scientific knowledge and Buddhist philosophy can help the monks understand the reality of the universe better.
A workshop called ‘Astronomy to Cosmology’ held in Bumthang last week gave monks all the reasons to learn more about science. 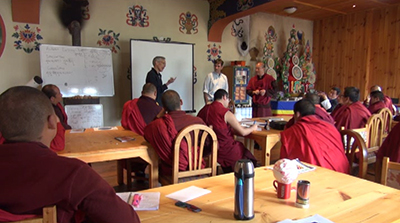 From lessons on the universe to hands on experience of seeing through a telescope and meeting Albert Einstein, the classes have been one kind of an experience for the monks.
“In Buddhist philosophy, there are manuscripts about the lifespan of the earth, moon and the stars. Through this workshop, all such theories are brought to life with pictures and calculations. We are now very much convinced that whatever the Buddha and other Indian saints said are true. It’s incredible to learn how Buddhist philosophy and science are similar,” said a teacher of Kharchu Shedra, Tenzin Jamtsho.
Inside the classroom are some thirty monks passionately attending a lesson. Their teachers today however are two American scientists and the subject they are being taught is Science.
“When we experience the Buddha’s teaching in reality through scientific equipment, it makes us more devoted and committed to Buddhism. In the last nine days of the workshop, I have understood about the Solar System,” shared Tshewang Jamtsho from Mongar Rabdey.
The scientists and the Buddhist scholars in the workshop believe that a good knowledge of science coupled with Buddhist philosophy can help the monks propagate their knowledge more efficiently.

“We all live in this modern century where science is a really important part of our experience and understanding of the world. And when monks and nuns study Science, it gives them an opportunity to have new conversations to incorporate the Buddhism that they have studied so hard and to use the knowledge of science to help them share their knowledge with a wider audience. So, it sort of helps the monks and nuns reach out to their own community,” explained Dr. Bryce Johnson, a Scientist from the United States.
The workshop organised by the Ati Foundation in collaboration with Science for Monks Foundation, a nonprofit organization based in the United States is the second of its kind in the country.
The General Secretary of Ati Foundation, Ngodup Dorji said, “We are in a time where our culture is rather diluting and where science has picked up and the world believes in science. So, we cannot isolate ourselves as the monastic. So, to be able to reach out to people, I think we need to use science as a tool to convey the profound philosophy of Buddhism.”
A similar workshop was organized at Lobesa in Punakha last year. Meanwhile, this coming together of Science and Buddhism has ignited a new found enthusiasm among the monks to learn and relate the subjects to one another.