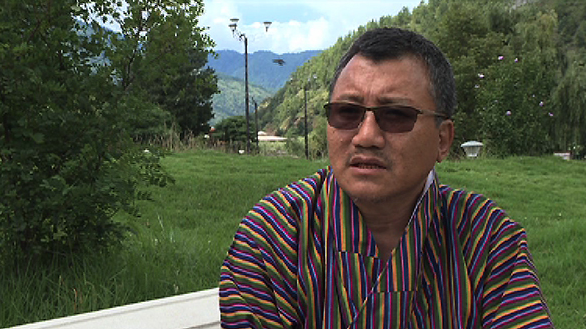 Dr. Chencho is Bhutan’s first qualified psychiatrist
Mental health problems are a major health concern but treating it remains an uphill battle in Bhutan, a country steeped in superstitious beliefs.
Social stigma, which stems from lack of awareness, continues to derail efforts to normalise mental health problems. Doctor Chencho Dorji, Bhutan’s first qualified psychiatrist, shares that convincing people to look at and treat mental health challenges like any other diseases is crucial for reducing stigma.
“Just as our body is vulnerable to illnesses, our mind, too, is vulnerable to illnesses, all types of illnesses,” said Dr. Chencho.
But getting this crucial message across to the masses has proved to be anything but easy. “It is very challenging especially with our population because the people have very less knowledge about mental health,” said the doctor.
“Most of the time when people fall sick, they tend to think of supernatural causes and perform rituals instead of coming to hospitals to seek treatment.”
The recent WHO report stands testimony to what the doctor shared. The report put the figure of people fighting depression in the country at an alarming 20,000.
To put the issue into perspective, it is important to take into account that depression is just one of the mental health problems prevalent in the country. This means the actual number of Bhutanese with mental health challenges could be much higher.
But what is even more unsettling is that only about a thousand people sought medical treatment or intervention, which is a mere five per cent of the total number of people battling depression. The rest are suffering in silence. Now, this is a huge treatment gap. And, certainly, a cause for concern.
Another disturbing fact is that of the thousand people who came to seek treatment, only a few came voluntarily. The rest came to the hospitals involuntarily, meaning they were referred, some by police, few by courts and others were brought by family members.
Public awareness on mental health key to tackling stigma
So, why why do only a handful of people fighting mental health challenges seek medical help? Apart from social stigma, Doctor Chencho says there is another reason. A reason that, perhaps, is even more concerning.
It is called lack of insight, a medical term used largely to describe a situation in which people with mental health challenges do not realize they are sick in the first place.
“How do we provide treatment to those people who have no insight and who do not want to accept treatment? It’s a special challenge for us,” said Dr. Chencho.
Doctors say it is equally important to know and understand that all problems related to mental health can be treated. “Because when we do not know the illness can be treated, or the cause of the illness, that’s when our minds gets filled with myths and superstitions,” said Dr. Chencho.
It is known for a fact that raising awareness on mental health issues among the general public is key to getting rid of stigma and dispelling myths and superstitions about mental health. The question then is- are we doing enough to create awareness?
“We are not doing enough. We need to do much more. We are trying and doing bits and pieces here and there but we need to put in a very concerted effort,” said Dr. Chencho.
The awareness programmes, doctor said should be held regularly so that tackling mental health stigma becomes a mainstream issue. “Instead of just taking it up whenever we get time or on occasions like world health day, the effort has to be consistent.”
Clearly, Bhutan has a long way to go when it comes to addressing mental health s It is about time the issue is given attention it deserves.