Bhutan targets to eliminate mother-to-child transmission of HIV, Syphilis and Hepatitis B by 2020, a decade before the regional target.
Officiating chief programme officer with the Communicable Diseases Division, Namgay Tshering, during the first day of the 4th Biennial heath conference yesterday said the target is achievable with the current progress in Bhutan in line with the targets set under the regional framework.
WHO defined the elimination of mother-to-child transmission of HIV as a case rate of new pediatric infection of less than or equal to 50 per 100,000 live births and a mother-to-child transmission rate of less than 5 percent in the breastfeeding population or less than 2 percent in the non-breastfeeding population.
Namgay Tshering said that antenatal care (ANC) coverage, HIV and syphilis testing coverage of pregnant women; and treatment coverage of more than or equal to 95 percent also need to be achieved.
According to Annual Health Bulletin 2016, ANC coverage including at least one visit is 97.9 percent. Meanwhile, maternal, newborn and child health (MNCH) report 2016 reveal that HIV testing coverage in pregnant women in Bhutan is more than 95 percent while Antiretroviral therapy coverage of HIV positive pregnant women is 99 percent.
Namgay Tshering said syphilis testing coverage of pregnant women in the country is more than 95 percent (MNCH, 2016) while treatment of syphilis-seropositive pregnant women is 98 percent.
The region sets the elimination goal of mother-to-child transmission of hepatitis B as a 90 percent reduction in new chronic infections, equivalent to 0.1% prevalence of hepatitis B surface antigen (HBsAg) among children.
The regional target requires hepatitis B birth dose coverage and hepatitis B third dose coverage of 95% to be met by 2030 while Bhutan achieved at least more than 95 percent.
He said that inconsistencies in reporting data from districts to the central programme in the process of transition to district health information software (DHIS); sustainability of HIV, syphilis and hepatitis B screening in BHUs; and inconsistent quarterly STI reporting by Dzongkhags are some of the current gaps.
The revised STI reporting forms will be circulated to Dzongkhags, constant monitoring of HIV, STI and hepatitis B test services in BHUs by Dzongkhag health officers and National AIDS Control Programme to report to the ministry on half yearly basis with the status of triple elimination goal are some of the way forwards, Namgay Tshering said.
At the opening of the conference at the Convention Center in Thimphu yesterday, home minister Dawa Gyaltshen said Bhutanese are fortunate to be born in the country where healthcare services and facilities are provided free of cost at all times.
“Good health is central to human happiness and wellbeing,” Lyonpo Dawa Gyaltshen. “It also makes an important contribution to socio-economic development processes as healthy population live longer and are more productive. Improving health services across the country is a top priority of the government.”
Health minister Tandin Wangchuk said the conference is considered the highest policy making forum that upholds participatory approach in making informed-decisions.
Lyonpo said the conference provides platform that stimulates healthy debate over issues and policies to enhance service delivery. “It also provides an avenue to rejoice and celebrate accomplishments made by the dedicated health workforce across the country to fulfill the noble vision of our monarchs.”
The health ministry introduced the annual award system to healthcare facilities to recognise the hardworking healthcare facility in-terms of implementing the 5S-Continous Quality Improvement (CQI) in their hospitals. 5S stands for Sort, Set, Shine, Standardise and Sustain. Besides this, Quality Assurance activities to rank the laboratories based on Laboratory performance was also initiated. The evaluation was conducted in accordance to the level of health facilities.
Mongar regional referral hospital, Trashigang hospital and Kanglung BHU I have the best laboratories among the referral hospitals, district hospitals and BHU Is.
Jigme Dorji Wangchuck National Referral Hospital was awarded the best 5S-CQI implementing referral hospital while Yabilabtsa dzongkhag Hospital in Zhemgang was awarded the best 5S-CQI implementing District hospital for this year.
About 180 health administrators and professionals from across the country are attending the three-day conference that ends on September 16. 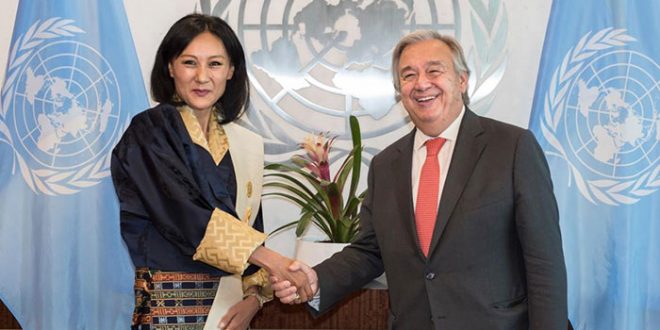