October 4, 2017
The country’s economy recorded the highest growth of 7.99 percent last year after having witnessed one of the lowest growths in 2013.
The economy continued to perform better compared with a growth of 5.7 percent in 2014 and 6.6 percent in 2015. Consequently, the country’s GDP or the size of the economy expanded from Nu 132B to Nu 148.67B.
Construction, communication and transport are the main drivers of the growth in addition to increased investment in machinery and equipment. According to the national accounts statistics, sustained growth in government spending and improved trade deficit propelled economic growth in 2016. 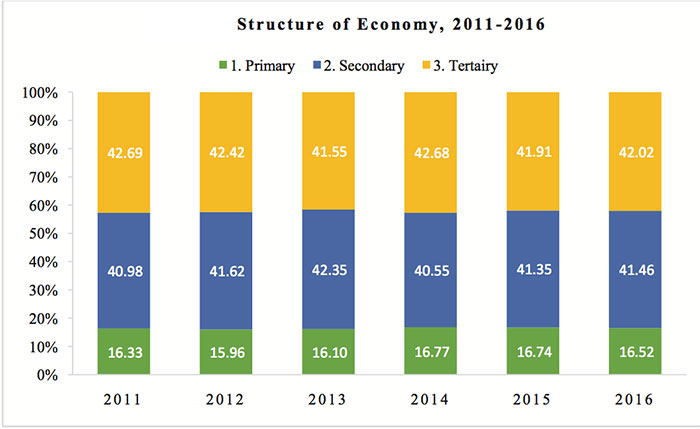 The GDP per capita in 2016 increased to Nu 193,447 (US $ 2,879) from Nu 174,479 (US$ 2,720) in 2015.
The per capita income saw a growth of 7.02 percent in 2016 compared with 2.69 percent growth in 2015, up by 4.33 percent. In nominal terms, the gross national income per capita amounted to Nu 177,394 (US$ 2,640) in 2016.
GDP is a measure of production, income and expenditure. It broadly determines how much a country can produce, generate income, consume and save. It represents the aggregated final results of the production activities of all the economic institutions located within the economic boundary of a country in a year.
Around 42 percent or nearly half of the economy is driven by service sector.
The primary sector’s share to GDP is 16.5 percent. However, the sector’s growth slowed to 3.65 percent in 2016 from 5.07 percent in 2015. The lower rate of growth, according to the national accounts statistics, can be attributed to non-performance in the forestry sector.
Within the primary sector, agriculture (crops) remains the main driver with a growth of 6.5 percent. The forestry and mining sector recorded negative growth.
After a long and sluggish growth, crops recorded value addition of Nu 14B due to increased production of potato, chilli, and paddy.
With the huge growth in cattle population and improved breed, livestock sector saw a growth of 6.42 percent compared with negative growth of 23.06 percent in the previous year.
In the secondary sector, the industries saw growth of 6.79 percent in 2016, 1.43 percent down from 8.22 percent in 2015. Within the sector, construction sector was the driver of growth with 13.31 percent compared with 10.60 percent in 2015. The secondary sector’s contribution to GDP stands at 41.46 percent, an increase of 0.11 percent.
The construction sector, however, constituted 34.50 percent government construction and 65.50 percent private and public corporations construction. In 2016, government construction recorded higher growth than the private construction.
The growth of the service sector hit 10.48 percent in 2016 from 5.45 percent in the previous year. Transport and finance sectors were the main contributors to the sector’s growth.
Wholesale and retail trade sector (Trade and Repair of Motor Vehicles, Motorcycle, Personal and Household Appliances) growth slowed to 10.59 percent in 2016 from 12.72 percent in 2015. This sector recorded a growth of 11.01 percent compared with 13.54 percent in 2015, down by 2.53 percentage points.
On the other hand, repair of motor vehicles, motorcycle, personal, and household appliances recorded growth of 12.11 percent in 2016 from 8.03 percent growth in 2015.
According to the report, performance of the hotel and restaurant sector is mainly contingent on the number of tourist arrivals in the country. In 2016, the number of dollar paying tourist arrival in the country increased by 6.16 percent. With the increased inflow of tourists, the sector recorded a growth of 9.90 percent in 2016.
“Despite strong growth, the size of the sector still remained relatively small in the economy with its share of GDP at 1.90 percent in 2016 and 1.88 percent in the previous year,” the report stated.
Transport, storage and communication sector recorded 11.20 percent growth in 2016 from 8.80 percent in 2015. Major contributions came from sub-sectors such as communication with growth of 18.72 percent and air transport with a growth of 63.38 percent in 2016.
The size of finance, insurance, real estate, and other business services increased to Nu 10.89B in 2016 from Nu 9.74B in 2015.
Within the service sector, finance, insurance, and real estate observed significant growth of 11.20 percent in 2016 compared with 8.80 percent in the previous year. The growth of the sector in 2016 was the highest since 2013.
Tshering Dorji

October 7, 2017
Although hydropower, which is supposedly the clean energy, is the country’s major energy resource, it’s spending on dirty energy such as fossil fuel is negating the hydropower revenue.
While the electricity sector is the leading contributor to growth of the economy – its share to GDP accounts for 13.38 percent of the total GDP in 2016 – transport sector is completely dependent on fossil fuels. And this sector is growing rapidly.
In fact, between 2015 and 2016, consumption of fossil fuels increased more than the supply of electricity from hydropower plant.
In monetary terms, the supply of electricity increased from Nu 14.27B in 2015 to Nu 14.84B in 2016, an increase of almost 2 percent.
However supply of fuel swelled to Nu 8.97B in 2016 from Nu 7.96B in 2015, a growth of approximately 13 percent.
Considering loan repayment of the hydropower plants, which is about Nu 3B annually, energy trade balance not only hovers around the red, but clean energy is also traded with dirty.
This is as per the annual environment accounts published and compiled by the National Statistics Bureau (NSB). 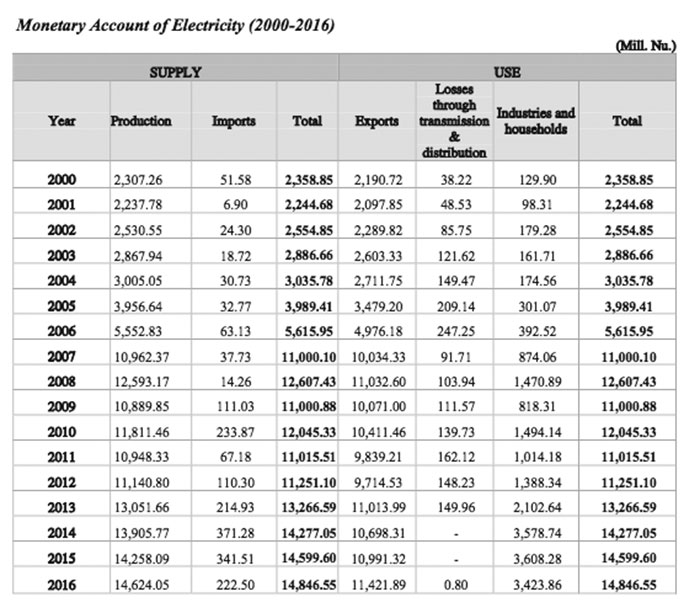 Going by the domestic consumption pattern of electricity, consumption of electricity by industries dropped by almost 17 percent in 2016 compared with 2015. Industry accounted for almost 73 percent of the total consumption, while electricity consumption by households accounted for the remaining 27 percent.
It has been observed that electricity consumption by households steadily increased in 2016 while consumption by industries dropped.
In terms of percentage share, the overall domestic use decreased from 28 percent in 2015 to 27 percent in 2016. On the other hand, export share increased by 2 percent from 70 percent in 2015 to 72 percent in 2016.
Moreover, Bhutan’s electricity import during lean season has been declining. Between 2000 and 2016, there has been 10 percent increase in export of electricity on an average and import fell by slightly more than 30 percent.
On the flipside, Bhutan’s import of fossil fuels such as diesel, petrol and LPG is increasing.
The total supply of fuel increased from 155,972 KL in 2015 to 163,499 KL in 2016, which is increase of 5 percent. Use of petrol grew by 6 percent in 2016. Diesel use increased by 5 percent approximately
Bhutan imported around 127.54 million liters of diesel in 2016 as compared to 122.10 million liters in 2015, an increase of around 4 percent. Similarly, the import of petrol in 2016 increased to 359.60 million litres from 338.81 million liters in 2015, an increase of 6 percent.
Diesel import accounts for 78 percent in 2016 and petrol accounts for 22 percent.
This is primarily because the number of vehicles imported over the years has gradually increased. In 2016 alone, 9,419 units of vehicles were imported. Import of light vehicles was the highest at 6,188 units followed by heavy vehicles at 990 units, two wheelers at 734 units, taxi at 628 units, earth moving equipment at 399 units and power tiller at 229 units.
Kerosene is imported from India. Import of kerosene increased from 4,611 KL in 2015 to 4,791 KL in 2016. Import growth was about 4 percent.
Besides, kerosene supply grew from Nu 72.46M in 2015 to Nu 77.67M in 2016. Considering the national average household size of 4.5 and the projected population of 768,577 in 2016, every household consumes an average of 27.84 litres a year.
Likewise, the import of LPG increased from 7,302.60 MT in 2015 to 7,593.23 MT in 2016. Given that 14.2 Kg is the net weight of each cylinder, in 2016, about 545,999 LPG cylinders were consumed. This means that every household in 2016 consumed an average of 3 cylinders.
However, the annual environment accounts stated that from the total import of petrol and diesel, some portion is consumed by Indian vehicles plying on Bhutanese roads transporting goods into and out of Bhutan. It also includes fuel consumed by Indian tourist vehicles and refueling by Indian vehicles in the border towns of Samdrupjongkhar, Gelephu, Phuentsholing, and Samtse.
This re-export of fuel decreased from 19.85 million litres in 2015 to 14.94 million litres in 2016, a decrease by 25 percent.
The annual environmental accounts, according to the NSB, is intended to provide environment related information in key economic sectors so that planners, policy makers, researchers and other data users can use the information for better decision and policy-making purposes.
“Green Economy or green growth has been brought to the forefront of today’s agenda globally by many international experts. There is a growing demand for green economy indicators both from policy and decision makers,” the report stated.
Tshering Dorji

October 7, 2017
Agriculture, the main sector that provides livelihood to more than half the population of this country, is witnessing a curious change today. While our national dream remains to make agriculture the priority sector, labour shortage is increasing by the year. Even as we have recognised that rural to urban migration could lead to undesirable consequences, particularly in the remote pockets of the country, we have not been able to stop or reduce the phenomenon.
According a recent agriculture report, large movement of people from rural to urban centres is hurting the agriculture sector badly. More than 50 percent of farming households faced labour shortage in 2016. At the same time, crop damage by wild animals continues to hurt our farmers. In the same year, more than 40 percent of farmers reported crop damage by wild animals. Access to market, rather the lack of it, remains a challenge.
These are significant factors that discourage our farmers from growing more than just enough for household consumption. Of the country’s 7.8 percent arable land, only 2.93 percent is under cultivation. At a time when almost all our villages are connected with road, lack of access to market ought not to be a problem. Electric fencing programme and improved irrigation facilities have brought some benefits to the farmers. Rural Enterprise Development Corporation Ltd.’s increased loan ceiling from Nu 100,000 to Nu 500,000 allowed farmers to undertakes bigger ventures in the sector. However, they have not helped turn agriculture around in a big way.
Agriculture ministry aims to produce 60,000 metric tonnes of vegetables to enhance food security and nutrition situation of the country. Target numbers are astounding. This will entail construction or renovation of hundreds of kilometres of roads and irrigation channels by 2018. Without collaboration with other ministries and agencies, such huge project could be difficult to implement. Food self-sufficiency has been our dream since the first Plan. Yet, agriculture is the sector that continues to be allotted the least national budget. The sector was allotted 44 percent of budget in the 4th Plan which dropped to 33 in the 5th Plan. In the 10th Plan, the sector received 5.5 percent of the budget which further dropped to 2.3 percent in the 11th.
Agriculture minister has said we are not deterred by the numerous challenges. Coming from the minister, these are encouraging words. What will matter more, though, is how successfully we address the many factors that affect the sector. We are an agrarian society. A significant portion of our population is still in agriculture.
It is about time we gave agriculture the top priority. This means giving fair share of national budget to the sector.