About 400 black-necked cranes arrive in Bhutan 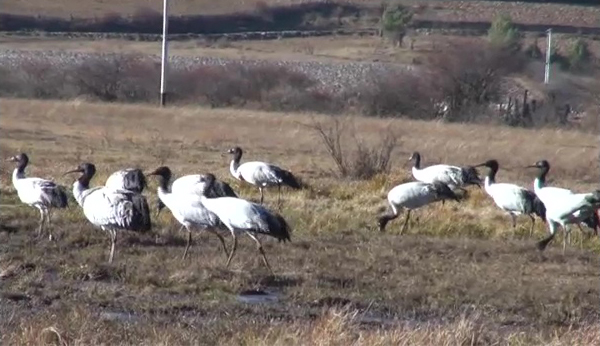 Close to 400 black-necked cranes have arrived at their winter roosting grounds in Bhutan. The Royal Society for Protection of Nature (RSPN) is looking forward to seeing more cranes arrive this winter.
The black-necked crane is an endangered bird species. The rare and the graceful birds migrate from their breeding grounds in Tibet to their winter grounds in Bhutan and roost in the country until spring.
Phobjikha valley is one of the most popular winter habitats of the threatened black-necked cranes. The valley sees the highest number of cranes every year.
Every winter, people in Phobjikha valley await the return of the majestic birds. This winter, some 342 birds have flown to the valley so far. Last year, 430 of them spent their winter in Phobjikha.
Records maintained over the decades show an increase in the number of the birds flying to Bhutan. From over 300 birds in the mid 1980’s, the number has increased to over 600 in the recent years.
However, some habitats have been seeing lesser birds. For instance, Bumdeling valley in Trashi Yangtse saw only 19 cranes so far this year. Last year, 90 cranes flew to the valley.
Similarly, only 16 cranes were spotted in Bumthang, 10 in Lhuentse and five in Khotakha and two at Saephu in Wangdue Phodrang.
“If you look at Bumdeling habitat, ever since the mid 1990s’ flashflood, which washed away major foraging area of the crane, there’s been decline in the crane population,” said Jigme Tshering, a Project Officer of the RSPN’s Black-necked Crane Conservation Programme.
Bajo in Wangdue Phodrang used to be a winter habitat for the balck-necekd cranes. “There is no written record but elderly people from there say that in the past when Bajo was all paddy fields, hundreds of black-necked cranes used to fly there in winter,” shared Jigme Tshering.
Bhutan has made significant strides in conserving black-necked cranes. The Royal Society for Protection of Nature (RSPN) is at the heart of the country’s black-necked crane conservation efforts.
Last year, it signed a MoU with the Department of Forest and Park Services to ensure the cranes continue to fly to Bhutan in winter. “When we conserve their habitat, a lot of other unknown wildlife, flora and fauna species end up being conserved, which have more or equally significant roles to play in the ecosystem,” Jigme Tshering explained.
In conserving black-necked cranes and their habitats, Jigme Tshering said, the local human inhabitants too benefit from it. “Phobjikha valley is tourist hotspot. Why do they come there? It is not only because of the black-necked cranes.”
He said that the scenic beauty and pristine environment of the valley, which were left intact to protect the crane habitat, attracts the tourists.
Black-necked crane is categorized as vulnerable in the International Union for Conservation of Nature’s Red List of Threatened Species. The bird species is legally protected in Bhutan. A person committing offence in relation to the protected bird species is liable for a criminal offence of fourth degree felony under the Penal Code of Bhutan.

Bhutanese researchers have recorded 15 new lady beetles and 11 species of bats in the country.
The bat species were discovered from Chukha.
The research was presented at the 4th Annual Bhutan Ecological Society Symposium in Thimphu.
Lady beetle species are widely known for their predatory roles. Although their roles in the eco-system consist of feeding on aphids and insects, most are beneficial for gardening and agriculture.
The study that was conducted with support from National Biodiversity Centre (NBC) and Bhutan Trust Fund (BTF) also recorded two sub-species of lady beetles.
Until last year, records show that Bhutan had 75 different lady beetles in the country. With the new addition, there are 90 species and two sub-species today.
Associate lecturer at College of Natural Resources, Cheten Dorji, said that with 41 species, Chukha has the highest species of lady beetles, followed by Wangdue (21).
“69 species of lady beetles were observed in the western region of the country and 33 in the southern region of the country,” Cheten Dorji said.
There were 31 lady beetle species in the central and 22 species in the eastern region of the country.
Of the 90 species in the country, 9 and two sub-species are endemic to the region.
Cheten Dorji said that people are unaware of the importance of lady beetles. “The farmers think that the lady beetles destroy the crops. But it is the aphids that affect the crops.”
Although some lady beetles feed on crops, adult and larvae lady beetles feed on soft-bodied herbivores such as aphids, leafhoppers, white flies, mealy bugs, scale insects, and mites.
Symposium participants suggested using lady beetles for agriculture purposes.
A field guidebook about common lady beetles of Bhutan was also launched at the symposium.
A study conducted by lecturer of Royal Thimphu College, Sangay Tshering, recorded 11 different bat species from Chukha.
In the eco-system, bats are known for pollination, prey and predator roles. Because bats feed on various species of insect pests, they are also used for agricultural purposes. Bats are just one of several groups of animals that prey on the mosquitoes.
Sangay Tshering said that because there are no documented records about bats, people would not even know if certain bat species go extinct in the country.
He said that the study showed that firewood collection and free grazing posed the maximum threat to bat conservation. “We also gave conservation awareness to students, locals, and stakeholders.”
The study that was supported by World Wildlife Fund and Rufford Foundation covered 70 percent of villages in eight gewogs of Chukha.
Bhutan Ecological Society (BES) will select some of the research work for documentation.
BES official said that the research papers would be distributed to the stakeholders for future use. “BES in line with its objective conducts annual research symposium, which is a consortium for researchers, cross-breeding ground for ecological knowledge from different sectors, and a platform to educate and advocate on pressing environmental issues in Bhutan.”
A general guide on the common dragonflies and damselflies, moths, bees and wasps, and molluscs in the country were also launched at the symposium.
Twenty-nine researchers from forestry, agriculture, civil society organisations, and education presented their work at the symposium.
Phurpa Lhamo