January 18, 2019
The National Assembly will today endorse the Bilateral Air Service Agreement between the United Arab Emirates and Bhutan.
Minister for information and communications Karma Donnen Wangdi tabled the agreement, which contains 12 articles, for discussion yesterday. The agreement was introduced in 2013.
Members of the parliament discussed the pros and cons of agreeing to the service between the two countries. Lyonpo Karma Donnen Wangdi said that Bhutan already has international flight service to India, Thailand, Singapore, Bangladesh and Nepal.
Besides making air travel convenient for Bhutanese to the Middle East, the United States and Europe, agreeing to the air service agreement will bring business, the minister said. “This will also help boost tourism,” he said.
Supporting the agreement, Athang Thedtsho MP Kinley Wangchuk said it is evident that a direct flight to UAE has more benefits than negative impact. He added that countries in UAE have triple purchasing and spending power, which will help boost the Bhutanese economy.
However, he cautioned that while expanding air service, national security also needs to be strengthened.
Panbang MP Dorji Wangdi said that when such important agreements are discussed it is important for the minister introducing the agreement to explain both negative and positive impacts of the service. “I’m wondering why the minister just spoke on the benefits of the air service agreement,” he said.
He added that endorsing this agreement would hamper business for Tashi Air and Drukair. Moreover the size of the existing international airport in Paro should be expanded to accommodate numerous aircraft.
Panbang MP repeatedly insisted lyonpo Karma Donnen Wangdi to explain the negative impacts and questioned if the government has plans to open another International airport like Paro.
Agreeing to the MP, lyonpo Karma Donnen Wangdi said that it will definitely impact business for the two air service providers in the country but endorsing and agreeing to the tabled agreement does not mean all aircraft will land at Paro airport. “We operate international flights to seven countries but only Drukair and Tashi Air’s aircraft land here,” he said.
Opposition Leader (Dr) Pema Gyamtsho added that should Drukair and Tashi Air benefit from the agreement, they should enjoy fifth freedom. Fifth freedom is allowing aircraft to pick up passengers from airports in between the destination.
Bhutan will hold a meeting with India government to discuss on the fifth freedom next month. Government of Bangladesh has given fifth freedom rights to Bhutan in May 2011.
Nirmala Pokhrel

January 18, 2019
The five commercial banks and three non-banking financial institutions (two insurance companies and one pension entity) earned a combined net profit of Nu 802M in 2017-2018.
The asset growth of financial sector has averaged 10.5 percent, increasing from Nu 107B in June 2015 to Nu 161B in June last year.
According to the Royal Monetary Authority’s annual report, total credit of the financial sector stood at Nu 108.81B billion as of June 2018 compared with Nu 95.06 billion in June 2017.
However, banks are confronted with excess liquidity. Banking norms mandate a minimum of 20 percent or the total liabilities as statutory requirement. The statutory liquidity ration (SLR), which the banks must set aside in form of its liabilities, is 31 percent. 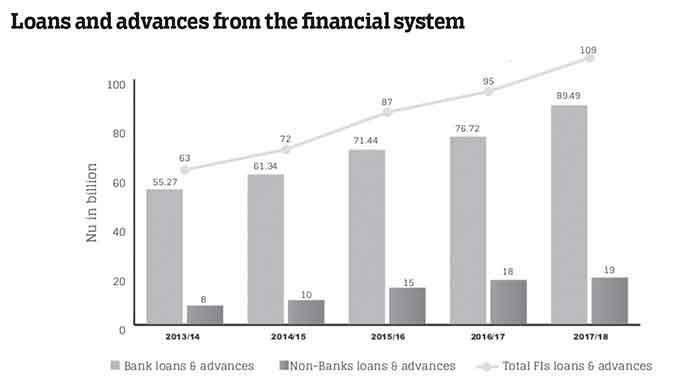 Surplus liquidity occurs where cash flows into the banking system persistently exceed withdrawals. Excess liquidity could prove unhealthy for the banks because the cost of maintaining the cash flow could exceed the interest income or in other words the banks are not able to lend what was deposited.
“Banking sector has persistent liquidity surplus due to the accumulation of net foreign assets in excess,” the annual report stated. As on June 2018, the total liquidity surplus was recorded at Nu. 18.49 billion.
This is happening despite an increase in loans by Nu 13B. The sector-wise analysis reveals that out of the total loans of Nu 108.81B, housing sector has the highest portfolio with Nu 25.72B (23.6 percent) followed by service & tourism sector with Nu 25.21B (23.2 percent), and trade and commerce with Nu 15.02B (13.8 percent).
“Development in credit is generally influenced by liquidity in the banking sector, quality of assets, cost of fund and economic conditions. With nascent stage of capital market development and continued reliance on credit from the banking sector, the domestic credit market has been on an expansionary mode in the recent years,” the report stated.
It also pointed out that As of June 2018, the financial institutions recorded a credit growth of 13.3 percent, largely contributed by higher growth in transport (27.2 percent), services (25.9 percent) and housing sector (18.5 percent). With the implementation of the PSL, credit to agriculture increased by 11.1 percent in June 2018.
The report also stated that almost 90 percent of credit was allocated to the private sector.
However, the RMA found that Bhutan’s credit growth reflects high volatility since credit to commercial sector grew by 22.2 percent while there is increasing allocation of credit in consumption and import led sectors, leading to unevenly distribution of credit and rising bad assets in these sectors.
The economy, according to the RMA, is witnessing a sign of deteriorating Non-Performing Loan (NPL) from Nu 10.80B in June 2017 to Nu 12.54B in June 2018. The sector with the highest NPL during the period under review is trade and commerce with 21.3 percent, followed by service and tourism with 19.3 percent, and housing with 18 percent.
Tshering Dorji

January 18, 2019
Thimphu city will have an additional 34 buses running from Babesa to Dechencholing, connecting with the secondary routes if the budget proposal submitted to the finance ministry is approved.
Thimphu has 46 city buses today.
City Bus Service’s Operations and Maintenance Manager, Pasang Tshering, said the proposal was submitted to the finance ministry a month ago. He added that if possible, Thimphu would have 91 buses including the existing buses.
Samdrupjongkhar, Phuentsholing, and Gelephu are also expected to receive additional buses. Phuentsholing has three city buses today.
Pasang Tshering said the buses would run along the trunk-line from Babesa zero point till Dechencholing, with buses from the subsidiary roads feeding the trunk-line. “Bus would be available every five minutes at a stop. This is for wider coverage, efficient service, and reliability. This will also help in decreasing traffic congestion and vehicle emission.”
While the pilot bus service provided to the students of Yangchenphug Higher Secondary School and Lungtenzampa Middle Secondary School would continue, Thimphu Thrompon Kinlay Dorjee said that the new plans of the City Bus Service would benefit students of other schools.
The bus services for the two schools started in April 2017 to help ease the traffic congestion at Lungtenzampa. The service proved to be a success, but couldn’t be expanded to other schools due to lack of fund.
Thrompon Kinlay Dorjee said replacing Lungtenzampa Bridge with a double-decker and flyovers would also ease the traffic congestion. “This is a part of thromde’s 12th Plan activities. We are hoping it to be a double-decker bridge, one that will lead to RSTA. The current one is causing traffic jam.”
Today Thimphu thromde is also restricting roadside parking to encourage building owners to build separate parking for tenants.
Thrompon Kinlay Dorjee said that it was compulsory for a building to have a parking space for each tenant in the building. This is monitored through the occupancy certificate, which is issued by the thromde.
The certificate has to be renewed every year. “When the certificate is renewed or issued, we monitor if the building has parking space. If basements are converted into commercial areas, we won’t issue the occupancy certificate.”
An occupancy certificate is mandatory to avail basic amenities like water and electricity. The thromde could stop the services if building owners deviate from the approved drawings of the building or if owners retrofit the building, without approval, after getting the certificate.
Relocation of the Lungtenzampa fuel depot is also one of the thromde’s plans towards reducing traffic congestion.
Phurpa Lhamo